The majority of the former Freshwater Tissue property, a long-time Humboldt Bay landmark also commonly known as the Samoa pulp mill site, is now Redwood Marine Terminal 2 (RMT 2). The District purchased 72-acres of the industrial site in August of 2013 for $1. An adjacent 17 acres is also being purchased, making the entire District-owned complex 89 acres. As an abandoned site, the remaining pulp liquors and other contaminants represented an enormous hazard to Bay health. The District immediately engaged EPA in cleanup.

The purchase provides land and public dock access, revitalizes vacant industrial space, and the cleanup ensures protection of the Bay’s natural resources along with the industries that depend on them.

With a vision to repurpose the area into a National Marine Research and Innovation Park, the facility has an array of assets to take advantage of, including 250,000 square feet of warehouse space, a 30 million-gallons-per-day water clarification system, a mile and a half of ocean outfall line, deep water access and copious amounts of water available — in the ballpark of 60 million gallons per day.

The District-facilitated EPA cleanup included Phase 1 which removed 3 million gallons of acids and pulping liquors then transported them for reuse in Longview, Washington. Phase 2 removed 30 steel and plastic tanks and 10,000 tons of caustic sludge. Phase 3 will remove the smoke stack and tile tanks, and phase 4 will clean up all 30,000 tons of demolition debris. 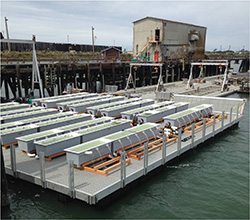 With phases 1 and 2 done, new tenants have already begun to move in. Adding some improvements of their own, Taylor Mariculture makes use of the existing industrial infrastructure to grow clam and oyster seeds. Humboldt County, in cooperation with the District, has received a Community Development Block Grant (CDBG) to engineer the reuse of the water and wastewater facilities in order to plan for upgrades.

With the clean-up process on track and renovations underway, Redwood Marine Terminal 2 is poised to help bring Humboldt’s working waterfront into a new era. 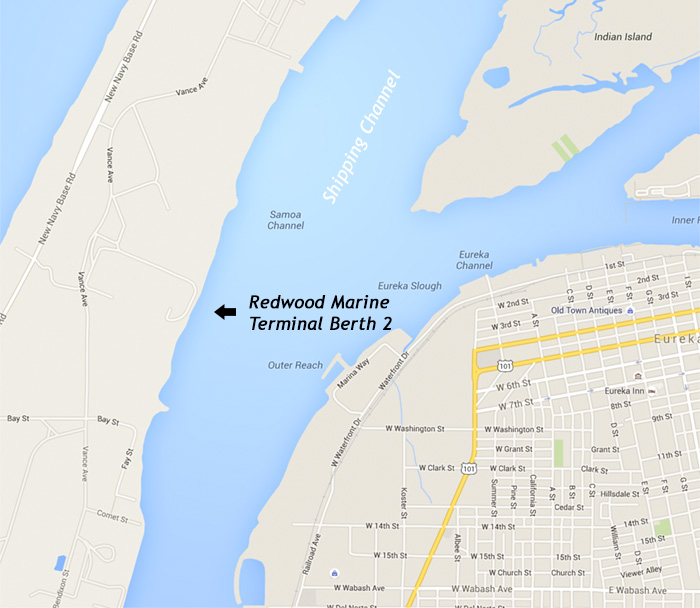