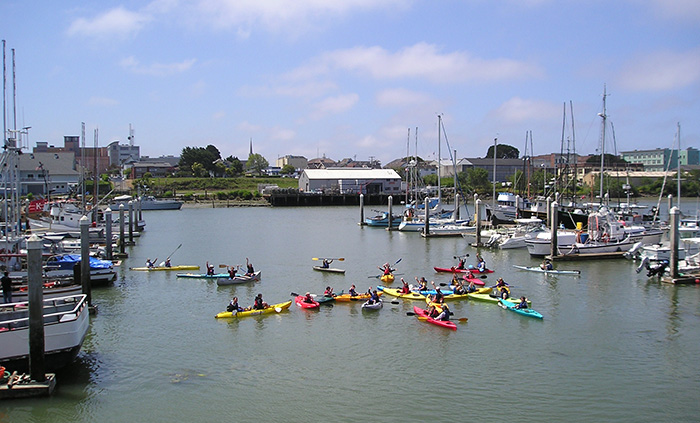 Use the Humboldt Bay Area Beaches and Dunes Recreation Map to find areas where you can enjoy the beaches and dunes. This map and guide is published by the Friends of the Dunes . It is available in print at various local tourist information centers.

Traditionally, sports anglers in Humboldt Bay have pursued several species of fish including perch, leopard sharks, jacksmelt, California halibut, bat rays and salmon. Improved boat launching facilities are located throughout Humboldt Bay and include facilities in Fields Landing, Samoa Peninsula (near the Coast Guard Station), at the Eureka Public Marina, under the southern end of the Samoa Bridge, at Hookton Slough on the Humboldt Bay National Wildlife Refuge, and at the Arcata Marsh and Wildlife Sanctuary. It is important to note that the Hookton Slough launching area is for non-motorized watercraft only and the Arcata ramp is shallow and usable only at high tides.

If you don't have access to a boat, Humboldt Bay offers several opportunities for fishing from shore. Some of the more popular shore fishing spots include the Del Norte Street Pier in Eureka, Elk River spit, Elk River (below the railroad bridge), Buhne Point in King Salmon, the mouth of Mad River Slough, and the north and south jetties. Note that access to the south jetty is controlled by the County of Humboldt. Also note that both jetties are subject to large, unpredictable, and dangerous waves. Please check the local weather forecast and use extreme caution when fishing on the jetties or in the vicinity of Humboldt Bay's entrance.

Humboldt Bay is very productive clam habitat. Clammers seek clams such as littleneck, gaper, Martha Washington, and others. Popular clamming areas include the foot of Del Norte Street in Eureka, the foot of Truesdale Street in Eureka, "Clam Island" across the channel from the Fields Landing Boat Ramp, and various locations in Arcata (North) Bay. Seasonally, recreational fishermen can catch Dungeness and red rock crabs in Humboldt Bay. Recreational fishing in Humboldt Bay is regulated by the California Department of Fish and Game. Before going fishing, clamming or crabbing, be sure you have consulted current Fish and Game regulations for seasons, size limits, bag limits and legal fishing gear.

With over 250 species of birds utilizing Humboldt Bay, birdwatching can be a year 'round activity. Popular hiking and birdwatching areas include the Arcata Marsh and Wildlife Sanctuary, the Humboldt Bay National Wildlife Refuge in southern Humboldt Bay, Faye Slough Wildlife Area north of Eureka, Mad River Slough Wildlife Area west of Arcata, Elk River Wildlife Area, and PALCO Marsh in southern Eureka. Interpretive centers that describe local bay habitats and wildlife are located at the Arcata Marsh and Wildlife Sanctuary and the Humboldt Bay National Wildlife Refuge. Beachcombing is popular on both the Pacific side of both the North and South Spits, the Elk River spit in Eureka and the King Salmon Beach.

Sailers are encouraged to contact the Humboldt Bay Yacht Club for information and activities taking place in and around Humboldt Bay.